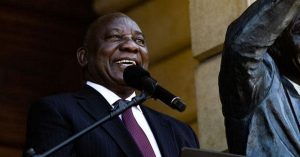 The Solidarity Movement sent a letter of warning to President Ramaphosa and the Minister of Cooperative Governance and Traditional Affairs, Nkosazana Dlamini-Zuma, cautioning them that any tightening of the existing lockdown restrictions would be ineffective and devastating for the economy and the citizens of the country.

It is expected that President Ramaphosa will address the nation early next week, after considering recommendations in a report by the health department.

“In the past, the government enforced measures that were ambiguous, impractical and irrational. We caution President Ramaphosa that we will challenge any further irrational and unreasonable measures in court,” said Flip Buys, chairperson of the Solidarity Movement.

“Fear of a second wave of the pandemic is constantly provoked, and every slight increase in numbers receives prominent attention. The reality is that the average rate of positive tests remains below 10% of those tested, while it was 30% when South Africa reached its peak,”  Buys said.

“Positive cases can easily be manipulated by increasing the number of tests in order to give the impression of a second wave. However, measuring the relationship between testing and positive cases would actually be the true measurement,” Buys said.

The Solidarity Movement strongly believes that drastic lockdown measures would not make a tangible difference in the number of positive cases. However, there will be decisive, tangible economic consequences due to drastic measures.

•    In the second quarter, 2,2 million people lost their jobs, and a significant number of them are the most vulnerable in South Africa.
•    The expected deficit in tax collection will amount to more than R300 billion.
•    The GDP fell by 16,4% in one quarter, which represents a 51% year-on-year decline.

The Solidarity Movement strongly advises the government not to introduce tighter lockdown measures, and the necessary legal steps will be taken should any absurd and unreasonable measures be introduced.