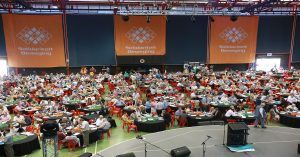 At a media conference held today, the Solidarity Movement encouraged its supporters to intensify their level of alertness, to remain calm amid the riots that are plaguing certain parts of the country, and to join their local neighbourhood watch.

According to Flip Buys, chairperson of the Solidarity Movement, faction fighting within the ANC, which initially led to the looting spree, provided a platform for criminal elements to abuse the situation to steal and to loot. Buys called on law enforcement to restore order and to arrest offenders. According to Buys, the public should, however, not leave their safety and that of their families and communities just to the SAPS because there is much that they can do themselves within the framework of the law to intensify their own levels of preparedness. “If you can protect yourself and your family, you can also protect your neighbours. If you can protect your neighbours, you can jointly protect your community,” Buys added. Buys encouraged people to join one of AfriForum’s neighbourhood watches that have been established countrywide or to join other community structures.

Kallie Kriel, AfriForum’s chief executive, said organised communities need not be plunged into fear, but can remain calm in the knowledge that their safety is in their own hands. According to Kriel it is not a strange phenomenon for communities to take responsibility for their own safety as several communities in KwaZulu-Natal have done in recent days. In the past Afrikaners have also assumed responsibility for their own safety whenever necessary. “In recent years, AfriForum has invested a great deal of resources in the establishment of community safety structures and already runs 159 neighbourhood watches, has a network of control rooms, a nationwide radio network, 12 500 neighbourhood watch volunteers, an air wing with 53 drone pilots and well-trained staff and volunteers. Apart from this, AfriForum collaborates with a network of other neighbourhood watches, GPF structures, security companies and, in many places, with local police stations,” Kriel said.

According to AfriForum Head of Safety Colonel Jan Wessels, AfriForum has already, at the onset of the riots, put its existing community safety plans into operation by having AfriForum’s neighbourhood watches on standby. Wessels pointed out that AfriForum’s control rooms and its structures on the ground are monitoring the situation closely, that guidelines have been issued to AfriForum’s neighbourhood watches to further fine-tune their existing safety plans with the current situation in mind. Neighbourhood watches were asked to increase visibility and to assist each other and other role players where necessary. “AfriForum will not involve itself in conflicts on highways and at other prominent places but will focus all its attention on being ready and prepared within the framework of the law to help ensure the safety of neighbourhoods where we operate,” Wessels said.

To join one of AfriForum’s neighbourhood watches, please visit www.afriforumbuurtwag.co.za.

The Solidarity Movement also calls on members of the public to contribute to the Movement’s Crisis Fund in support of Solidarity Helping Hand in KwaZulu-Natal to enable it to make essential provisions available to communities. Please use this link to contribute: www.krisisfonds.co.za.