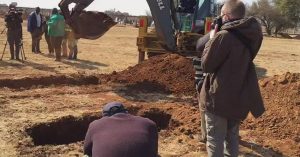 The Solidarity Movement today called for urgent investigation into possible irregularities regarding the issuing of any tenders to dig graves in Gauteng. This comes after it was revealed that the Gauteng Health MEC, Dr Bandile Masuku, in preparation on Covid-19 deaths, identified space for approximately 1,5 million graves and started digging it.

Flip Buys, Head of the Solidarity Movement, says that although the increase of Covid-19 deaths in this province should not be taken lightly, the assumption that there must be prepared for 1,5 million deaths – three times more than that of the entire world thus far – in this province alone, is absolutely absurd. “The first predictions which prompted South Africa to impose a national lockdown, estimated that the country in its entirety could have, at worst, 351 000 deaths due to Covid-19. However, these predictions were made before much was known about the virus and the trends. The Department of Health, in collaboration with medical experts’ own predictions was later adjusted to a possible worst-case scenario of 48 000 deaths nationwide by November this year. This possible worst-case scenario is far removed from what the Gauteng government now outlines for the single province,” said Buys.

According to Buys, this action by the Gauteng Health MEC raises many questions. “If the Department of Health itself predicts that South Africa could have, at worst, 48 000 deaths nationwide, it is outrageous to think that Gauteng should prepare itself for 1,5 million deaths, which make up about 10% of the province’s total population. Due to the massive difference between what is being predicted by the Department and what the Gauteng government is preparing for, it is extremely important to thoroughly investigate this project and the possible tenders associated with it,” said Buys.

According to Buys, actions such as these may lead to unnecessary panic and anxiety in the province while it is by no means based on any facts. “If the MEC predicts that there will be so many deaths in the Gauteng province he must be able to substantiate it by disclosing empirical facts. If not, he is acting irresponsibly,” said Buys.

Buys concluded that the Gauteng government’s seeming response to the pandemic is cynical seeing that they are rather providing mass graves instead of hospital beds. “The initial reason for the lockdown was to add more hospital beds, yet with more than 100 days in lockdown only approximately 400 hospital beds were added,” said Buys.