Future too precious to leave it up to government only 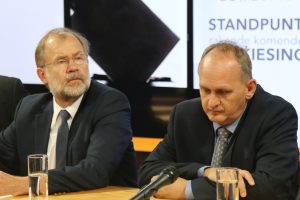 Let your vote count; however future too precious to leave it up to government only – Solidarity Movement

At a joint media conference held today, member institutions that form part of the Solidarity Movement took the view on the forthcoming election that participation in the democratic process is important, but that due to the deteriorating nature of the state, own initiative will have to be taken to build further.

The institutions belonging to the movement, including Solidarity, AfriForum, Solidarity Helping Hand and the Federasie van Afrikaanse Kultuurvereniginge (FAK) represent approximately 2 million people, which include 500 000 members and their families. It represents interests at various levels, including the world of work, community safety, minority rights, civil rights, social care and language and cultural heritage.

According to Flip Buys, chairperson of the Solidarity Movement, the movement remains politically unaligned, but it still encourages members and their families to vote. “While we engage with all, we do not align ourselves with any particular party. People are justifiably upset with the poor government, and the election does offer an opportunity to make your voice heard,” Buys explained.

“However, we do not want to pretend that South Africa is a normal democracy and that the country can be brought back on the right track simply by voting. Having said that, we certainly do not reject constitutional democracy; on the contrary, we defend it. However, it is common knowledge that the ANC has not just captured the state, but the entire constitutional democracy. The country and its institutions suffered incalculable damage due to large-scale mismanagement; corruption that has taken on industrial scale proportions; the ANC’s policy of cadre deployment with its purpose of controlling the entire country; the undermining of constitutional institutions such as the National Prosecuting Authority and others; the pursuit of a disastrous transformation policy; and the reintroduction of an encompassing race dispensation,” Buys explained.

According to Buys, the movement cannot merely stand by and observe how harmful policies and poor governance bring the country to the brink of the abyss, gambling with everyone’s future as such. “We are committed to the country and therefore we are using democratic and constitutional processes to demand accountability, grow the economy and to maintain the legal order. At the same time, however, reality has shown that it would be recklessly irresponsible to just leave our future in the hands of government. That is why we will announce plans after the election to give our Plan B more momentum. With Plan B we are also taking responsibility ourselves for our community’s future by organising strong community organisations in every important area. Our dual purpose is firstly to become less reliant on the state, and secondly to achieve greater independence,” Buys confirmed.

“The purpose of Plan B is not to isolate Afrikaners, for example, but to create those very cultural spaces to enable us to live together in Africa. By creating the circumstances in which Afrikaners can be lastingly free, safe and prosperous we can also make a sustainable contribution to the wellbeing of the country and all its people,” Buys said.

Solidarity Movement welcomes questions from the Netherlands about expropriation of land

Head of Land Committee proves land expropriation is about power